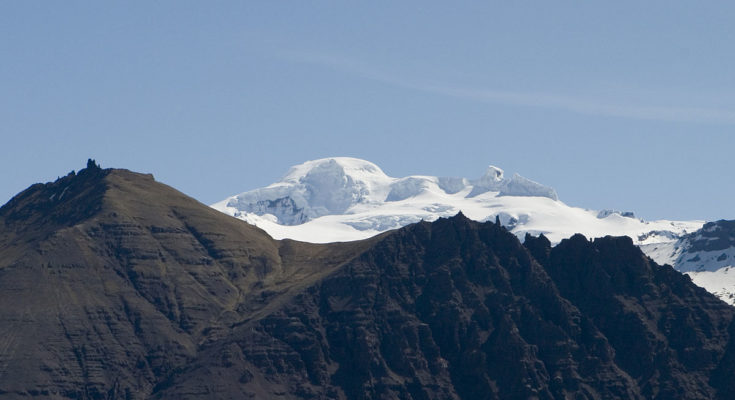 The Icelandic Meteorological Office has raised volcano eruption risk level to Yellow for Öræfajökull, an ice-covered volcano in south-east Iceland. New satellite images of Öræfajökull show that a caldera, measuring around one kilometer in diameter, has formed in the last few days on the glacier. Sulfuric stench has emanated from the Kvíá river, running from the glacier, for the past week.

“We found that there is a greater smell down here where the water is more turbulent and also that the electrical conductivity of the water is higher here then what we measured up near the lagoon,” said Melissa Anne Pfeffer, an atmospheric volcanologist at the Icelandic Meteorological Office while speaking to reporters near the glacier today.

With increased seismic activity in the area in recent months, scientists have kept a close look on the volcano. New seismic stations were installed around Öræfajökull earlier last month.

“Since the end of October, three new seismic stations are streaming data into the monitoring system at IMO headquarter improving IMO’s capability to detect and locate earthquakes in the area. This additional installation results in a much larger number of earthquakes of small size detected on a daily basis, and also improves the estimate of earthquakes spatial locations and their magnitudes,” says the Icelandic Meteorological Office.

Located at the southern extremity of the Vatnajökull glacier and overlooking the Ring Road between Höfn and Vík, Öræfajökull is the largest active volcano in Iceland. On the summit crater’s north-western rim is Hvannadalshnúkur, the highest peak in Iceland at 2,110 metres. Geographically, Öræfajökull is considered part of Vatnajökull, and the area covered by glacier is within the boundary of Vatnajökull National Park.

In 1362, the volcano erupted explosively, with huge amounts of tephra being ejected. The last eruption in Öræfajökull happened in 1727.