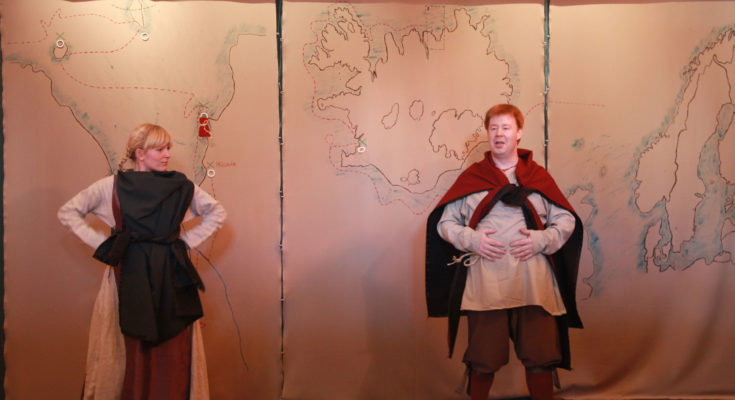 If you are going to Husavik this summer, make sure not to miss Let’s talk local, a new play by Snæbjörn Ragnarsson at Gamli Baukur. The play is set in the year 870 when Swedish explorer Gardar Svavarsson and his slave Náttfari were the first Scandinavians to live in Iceland for one winter. Contrary to what you might think, this is actually a comedy show – and a very funny one, I might add – but educating at the same time.

The story is told from the viewpoint of the explorer and the slave, and challenges the standard school-book explanation of how Iceland was first settled by explorer Ingólfur Arnarson in 874. While the stage is set in 870, the characters jump back and forth in time and tell all sorts of tales from the history of Husavik, in both educational and humorous way. Garðar and his slave Náttfari run into various Icelandic supernatural beings, ghosts, elf’s and trolls on their travels though time. Six local actors take turn performing the show, two in each show. The show is performed in English at Gamli Baukur restaurant, every day throughout summer at 15:30.