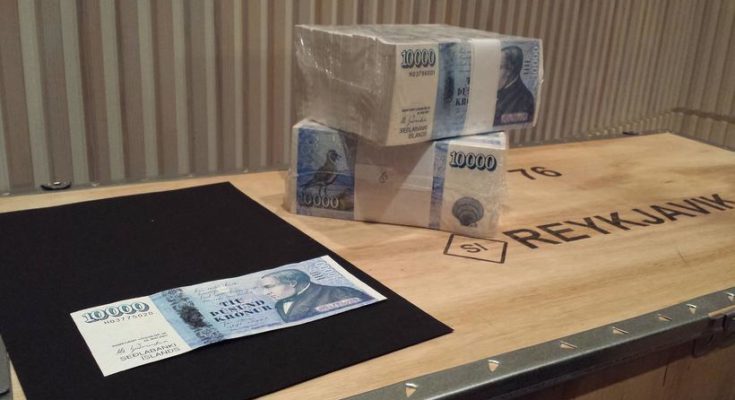 The Central Bank of Iceland introduced a new ten thousand krónur banknote today. The face of natural scientist and poet Jónas Hallgrímsson appears on the bill, as well as the Eurasian golden plover. Hallgrímsson was interested in the plover and mentioned her in some of his poems.

The new banknote will go into circulation in late October this year. It has 4 zeros, but the banknote with the most zeros in history is the Zimbabwe 100 Trillion Dollars bill, issued in 2009, with 14 zeros.

The new 10000 banknote was designed by Kristín Þorkelsdóttir, who also designed Iceland’s other denominations. The blue note measures 172 x 70 mm, and is protected by the following security features: a watermark of Jon Sigurdsson with electrotype 10000 and Cornerstones, 18-mm wide Optiks security thread, UV printing, intaglio printing, microprinting, and raised horizontal bars to assist the sight-impaired.

In 1981, the Icelandic króna was revalued, due to hyperinflation, with 100 old krónur being worth 1 new króna. Had that not been done, we would now be looking at a 1.000.000 ISK banknote.