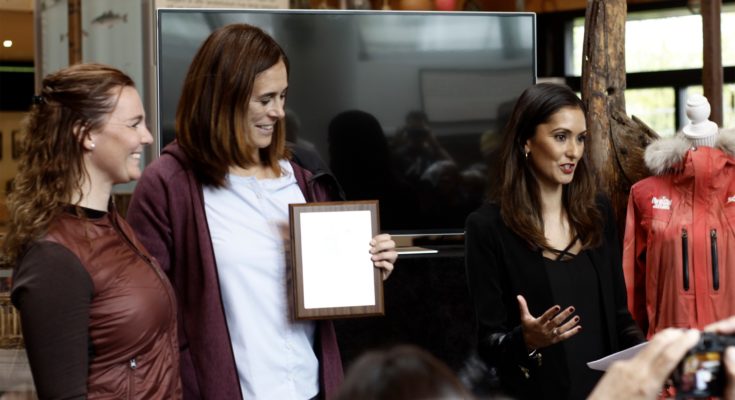 As the first woman to climb all the 14 eight-thousander peaks, Spanish mountaineer Edurne Pasaban has been awarded the 2017 Leif Erikson Exploration Award during the Explorers Festival in Húsavík this weekend. The award was presented to her by Icelandic mountaineer Vilborg Arna Gissurardóttir on behalf of the Scientific Committee of The Exploration Museum.

The committee awards her not only for her physical achievements but also for her inspiring determination. In fact, her historic achievement has not been an immediate success. When she faced her first eight-thousander, the Dhaulagiri, in 1998, she couldn’t reach the top. Also her first two tries on the Everest slopes, in 1999 and 2000, ended without fortune. All but discouraged by the initial failures, Edurne tried again in 2001 and finally reached the top of her first eight-thousander, the roof of the World, Mt. Everest. The same year she faced the shocking loss of her companion Pepe Garcés, who lost his life in the new attempt on Dhaulagiri. Struck by such tragedy, but with even more determination, in the following 12 months Edurne conquered four more eight-thousanders. Despite another traumatic experience in 2004, when she risked her life – and lost two toes due to frostbite – ascending the K2, Edurne never abandoned her goals, and in 2010 she completed the list of the 14 eight-thousander peaks, climbing 12 of them without additional oxygen.